The Von Bondies - April 2009 tour and May album release 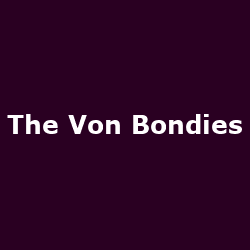 The Von Bondies, led by Jack White's Number 1 enemy, Jason Stollstheimer, will make their great return on British soil at the end of the month.

The Detroit quartet, will release their third studio album, 'Love, Hate and then There's You' [smirk] on May 4th, preceded by a first single, 'Pale Bride', out on April 27th, then they will play London Kings College on April 23rd, the Gaymers Camden Crawl on April 24th, before heading to Birmingham Bar Academy on April 25th, Glasgow King Tuts on April 26th, and the Ruby Lounge in Manchester on April 27th. After a few dates around Europe, they will go check out the Irish crowds, from Dublin (May 6th and 8th), to Galway (May 7th), Derry (May 9th), Belfast (May 10th), Cork (May 11th) and Limerick (12th).

Last March, "C'mon C'mon", their biggest hit to date, was announced to appear as a downloadable track for the music video game series Rock Band.