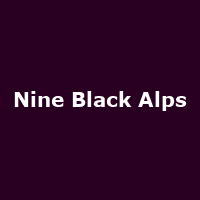 Grungey rockers Nine Black Alps have released details of a May 09 UK tour.

The Mancunian quartet will be hitting the road next month before the release of their third album 'Cold Star', follow-up to 'Love/Hate' to get those new riffs well and truly stuck in your head.

Earlier this week, the band released a video of new track 'Buy Nothing' on their website as a preview to the eagerly-anticipated album. Nine Black Alps, formed in 2003 way back when, take their name from a Sylvia Plath poem.

The new gig details follow a series of intimate set announcements in Manchester and Derby later in the year.

The tour kicks off in Nottingham on May 18th and will see through 9 dates, finishing off at the Hoxton Bar and Kitchen, London, on May 26th. Tickets are on sale now for a meagre Â£8! You have no excuses...