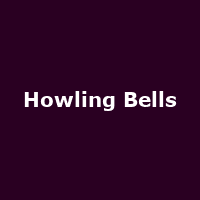 It's been a great start to 2009 for the Howling Bells. First they released their sophomore album 'Radio Wars' to widespread critical acclaim before heading out to complete a sellout UK tour. Now, with barely time to catch their collective breath the quartet of Juanita Stein, Joel Stein, Brendan Picchio and Glenn Moule are ready to unleash their singular charms on us all over again with the release of their second single 'Digital Hearts'.

Howling Bells are painting with vivid colours now. Take new single 'Digital Hearts' it's a brilliant, uncomplicated, up tempo song. It's the sound of a band on top of their game and their ambitions to write widescreen pop songs of substance being audibly realised. However, like all the Bells output and all great pop songs before it there's a twist that cunningly belies its underling euphoria. Listen closely, 'Digital Hearts' might not be as sweet as you first thought.

But with pounding drums high in the mix and Juanita's extraordinary voice curling around the chiming guitar lines, one thing is undeniable: Once you hear Digital Hearts over the airwaves you won't be turning the radio dial to any other station.

Howling Bells have been invited to tour the US with Coldplay throughout May and June.