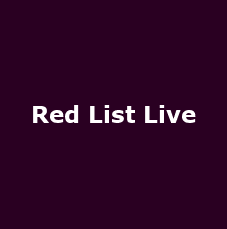 Another day, another festival cancelled - well postponed until next year, that is. The event, which was to take place at Port Lymne near Hythe, was to feature the Wedding Present and over 200 live acts, was designed to highlight the plight of the World's endangered species "red list".

We are deeply saddened to announce that Red List LIVE have taken the tough decision to postpone our first festival until 2010.

This is due to a number of factors, including the high risk of holding an event in the current economic climate, and the impact of increased capacity at established local festivals such as The Hop Farm.

We took the decision at this early stage, before final acts were booked, full promotion began, and site work undertaken in order to protect Red List LIVE's ability to host live events in the future.

Red List LIVE still plans to hold a series of smaller events this summer, with some of the bands already booked, before returning as a festival next year as part of our five-year plan.

All ticket holders have been fully refunded, and as a thank you for their support will be invited, free of charge to one of our upcoming events.

Despite the "postponed" statement, reading between the lines, it seems like that's the last we've seen of this particular festival, regrettably.