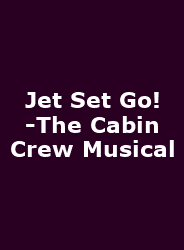 Fear not - this is not a West-End performance devoted to the, erm, acclaimed TV, erm, 'comedy' series "The High Life", but a song and dance-packed mile-high musical that mixes romance, comedy and a slice of Broadway many feet above the earth...well Piccadilly Circus at any rate!

Drawing from a cast that includes an established and talented cast experienced in previous shows such as 42nd Street, Rocky Horror, Mamma Mia, Spamalot and High School Musical, as well as the TV show 'Eurovision - Your Country Needs You', you can be sure of a top standard of high-flying fun. The story concerns a cabin crew on a plane destined for New York embroiled in a mix of lust, frustrations and good-natured laughter played out with dance and song with a light-hearted view.

This bright production has previously featured at the Edinburgh Fringe and the Theatre503 in Battersea, has been championed by several newspaper critics including the Daily Telegraph and The Scotsman and starts a 3-week run from Tuesday 31st March until Saturday 18th April at the Jermyn Theatre, Piccadilly. Tickets are a bargain Â£15 for adults and Â£12 for concessions.