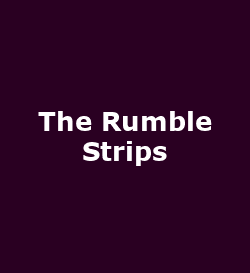 Devon-bred soulful Ska popsters, The Rumble Strips, are soon to release their sophomore studio album, 'Welcome to The Walk Alone', which is due out on June 8th and was produced by uber-hyped producer Mark Ronson in his hometown of New York. Ronson says of the collaboration: "some of my favourite [string arrangements] ever on anything I've ever produced".

In advance to the release, the merry quintet is offering a free download of the first single, 'London', via their Myspace page (www.myspace.com/rumblestripsuk).

The band are currently on tour in the UK, which began in mid-March until early April, with forthcoming shows at the Derby Rockhouse (March 27th) , Charlie Browns in Luton (March 28th) , Clwb Ifor Bach in Cardiff (April 1st) , The Tavern in Exeter (April 2nd), Chatham's Tap'n'Tin (April 4th) , The Guildhall in Gloucester (April 5th) and The Thekla in Bristol (April 6th).