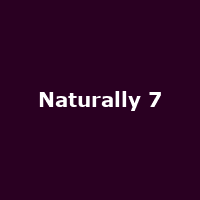 Naturally 7 bring their astonishingly versatile voices back to the UK this June for their first ever headline tour of the UK. As witnessed on the Royal Variety Performance and by Coldplay's Chris Martin, Jay Leno, Ellen DeGeneres Michael Buble and more, Naturally 7 put on a show stopping performance using absolutely no instruments. They become the instruments, bringing together gospel, doo-wop, beatboxing and soulful R&B. They call the results 'vocal play' and every single spectacular performance is mind-blowing.

YouTube has been their major showcase - their exuberant vocal display on the Paris metro (see links in seidebar) has already been seen by over two million people - but finally they are doing a full tour of Britain, featuring tracks from new album Wall of Sound.

At their Indigo O2 concert Naturally 7 asked rhetorically, "Are we a band?' after one dazzling routine. 'You're better than a band!' replied a blown-away fan.(The Guardian)