The Maybes - new single 'Trick Of The Light' and UK tour 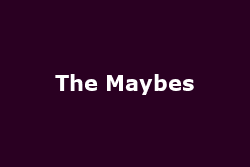 Penned as 'The Definitely Maybes?' by News Of The World, 'The Maybes?' are set to release a new single and have announced details of a co-headline tour of the UK.

The Liverpudlians are known for their classic-sounding indie-pop, think early Britpop-meets-Beach Boys harmonies.. The tour starts on March 26th and works through a myriad of shows with co-headliners Club Smith as the bands raise their profile in 2009. Their catchy hooks and dancey, upbeat sound are sure to impress the masses as the Northern lads make headway this year. 'The Maybes?' live performances are something not to be missed.

Tickets are Â£6-Â£7 dependent on venue, and are on sale now.