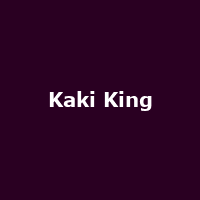 There are guitarists who are good and some guitar players who are f**king good. And then there's Kaki King - Dave Grohl of Foo Fighters, live in concert at the O2 Arena, November 2008

The incredible Kaki King returns to London for a special one-off date at Camden's Jazz Cafe on 2nd April. Famed for her stunning guitar technique as well as her ability to craft beautiful melodies and songs that span genres and defy preconceptions with ease, the "queen of instrumental nu-gaze guitar" (MOJO) will perform some brand new material from her forthcoming Mexican Teenagers EP as well as hits from her previous album, including last year's amazing Dreaming Of Revenge (Cooking Vinyl).

While largely known for her solo shows, Kaki will be joined for this set by excellent drummer Matt Hankle and long-time musical partner Dan Brantigan on the weird and wonderful analogue EVI, or Electric Valve Instrument, a breath-activated synth capable of producing a fantastic and beguiling array of sounds perfectly suited to match Kaki's eclectic music tastes.

Kaki hits our shores in April hot off the back of a run of shows in Australia for this single performance at the Jazz Cafe. Since her last visit to the UK, she has been working on an as-yet-untitled project with legendary producer Timbaland at his Miami studio, and has also collaborated with John Darnielle of The Mountain Goats on their Black Pear Tree EP, as well as co-headlining an American tour. This date is her first in London since her sold-out shows at The Roundhouse and the ICA in 2008 - don't miss another opportunity to catch one of the most spectacular guitarists of her generation.