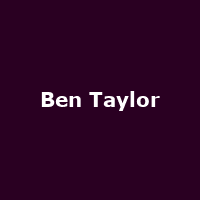 Kung Folk seeks not to know the answers but rather to understand the questions. Benjamin Taylor's memorable melodies, immaculate acoustic guitar playing and insightful, honest lyrics demand your attention with 10 songs that come straight from the heart. With his third full-length album, The Legend of Kung Folk, Part 1 (The Killing Bite), Taylor puts the "kick" back into folk music to reveal the humour, wit and skill of a singer-songwriter who's comfortable in both his own skin and with his impressive musical legacy.

The son of James Taylor and Carly Simon, Ben's life was always centred on music, although he spent several years travelling the world, developing a deep appreciation for the earth and the outdoors. His acclaimed previous releases include his debut album, Famous Among the Barns, and Another Run Around The Sun. Both were released on Iris Records, owned and run by Ben and his drummer, Larry Ciancia (Everlast, Ray LaMontagne). It's a place where the duo is able to control their artistic decisions and create opportunities for other like-minded artists.

Highlights from this era included appearances by Ben on Good Morning America, The Tonight Show, The CBS Morning Show, Last Call with Carson Daly, and Howard Stern. He also made his acting debut with a recurring role on NBC's American Dreams as Cal, a struggling singer/songwriter, and has appeared on the cover of Rolling Stone.

Making music has become as natural as breathing to Ben. Accordingly, this approach has coloured his songwriting on The Legend of Kung Folk - "Once you write it, a good song stands up on its own. You just have to be careful not to dress it in anything that will inhibit its natural potential. This time around I'm trying to focus less on making music and more on helping the music to make itself."

On The Legend of Kung Folk, his songs run the gamut from the sonically spacious acoustic piano/vocal duet with Jamie Cullum, 'After It's Over', to the enormous stack of background vocals on 'She's Gone' and from the tongue-in-cheek, lusty 'Wicked Way' to the earnest, uplifting 'You're The One For Me'.

Ben will be on tour in Britain in April 2009, with special guest David Saw.