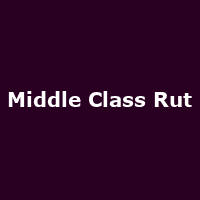 Sacramento's Middle Class Rut will release a new EP, '25 Years', on 4 May through Bright Antenna, preceded by a nine date UK tour supporting ...And You Will Know Us By The Trail Of Dead throughout April. The EP will be released on CD and a 3 x 7" vinyl set, as well as an iTunes bundle with the video for 'Busy Bein' Born' as a free extra.

The buzz that the band are building in the UK shows no sign of slowing down. Zane Lowe made the track 'I Guess You Could Say' his Hottest Record in the World last week and described the band as "legends of the near future", while John Kennedy made them his Artist in Residence and MTV2 will air a Spanking New session with the band next week.

MC Rut's raw and charismatic amalgamation of Refused, Jane's Addiction and Fugazi first took the UK by storm when they released their debut single 'Busy Bein' Born' last November. A session for Zane Lowe coupled with frenzied praise from NME, Kerrang! and Rock Sound sparked chaos at their tiny club shows, with Kerrang! describing their show at London's Macbeth as "a sweet, eardrum lacerating noise that most bands could never hope to muster". Last month, the duo ripped up venues across the UK supporting Innerpartysystem as well as some NME Awards Shows with Ida Maria, before heading out across Europe with The Bronx.

Even live, the chaos is created by just two men: singer/guitarist Zack Lopez, and drummer/vocalist Sean Stockham. Zack and Sean have a well-honed survival instinct after 10 years of bands gone wrong and labels gone bust, and as MC Rut they've made it their mission to write, perform and record every one of their tracks themselves. There's no doubt that they've created a sound that never fails to stop listeners in their tracks, and the release of '25 Years' will cement their status as one of the world's most exciting new rock bands.

"A breath of fresh air...they may just be your new favourite band" - Rock Sound

"Every note is underpinned with a stadium-filling, fists-in-the-air attitude that will cut the pretenders down to size" - Music Week

"Nothing short of colossal, and one that a a mere two-piece really shouldn't be able to create" - Kerrang!