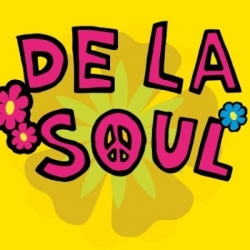 Flower power/ Hip Hop crossover pioneers De La Soul are to celebrate the twentieth anniversary of "Three Feet High and Rising" (I'm feeling old...) . The album spawned the hits 'Me, Myself and I' and 'Say No Go' and was instrumental in bringing Hip Hop to a wider audience, with its radio-friendly lyrics and message.

The album is listed in Rolling Stone magazine's Top 500 greatest albums of all time.

The trio Posdnuos, Trugoy and Maseo will be performing tracks from the album accompanied by a live ten-piece band at the The Ritz on 16th and 17th July as part of the Manchester International Festival 2009. Tickets cost £25 (£15 concessions) + booking.