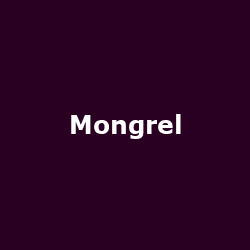 This Saturday, go 'Indie' if you haven't already, as Mongrel, the supergroup made of Babyshambles bassist Drew McConnell, Reverend and the Makers' frontman Jon MacClure, Arctic Monkeys' drummer Matt Helders, and former bassist Andy Nicholson, as well as poet rapper Lowkey, are feeling generous and giving away copies of their debut album, 'Better Than Heavy', in the Independent!

The politically-opinionated opus, released on the independent label, Wall of Sound, is said to feature the likes of 'Paper Planes' singer M.I.A, U.S cult SLAM poet/actor Saul Williams, and even Peter Doherty.

The collective, who formed earlier last year, have announced a few UK dates in the spring: the London Roundhouse on May 4th, the Nottingham Rescue Rooms on May 19th, Alma de Cuba in Liverpool on May 20th, Oran Mor in Glasgow on May 22nd and the Sheffield Plug on May 23rd.

In the meantime, Lowkey and Drew McConnell will play a set at Camden Proud Galleries this Friday March 5th (entry: Â£5.00 donations).