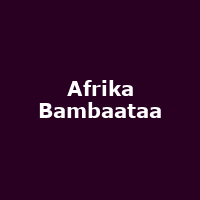 Electro pioneer Afrika Bambaataa, whose Soulsonic Force were behind the seminal 80s electro tracks 'Planet Rock' and 'Renegades of Funk' is over in London in two weeks time - DJing at the Coronet (New Kent Road, South East London) for a Nevereverland gig on Saturday 14th March.

The night features a whole host of DJ talent (but none of them as exciting as Bambaataa for me), including: The Bang Gang Deejays, Tame Impala, Drums of Death, Holy Ghost!, Alexis Taylor (Hot Chip), The Golden Filter, Zomby, Matt Horne, Modular DJs and more.