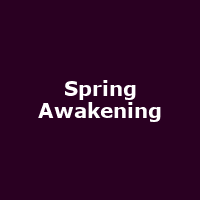 The cult rock musical is being extended until the end of October 2009.

Based on a book and lyrics by American poet and playwright Steven Slater, and with music by singer-songwriter Duncan Sheik, 'Spring Awakening', premiered in Broadway in 2006, and the UK stage production opened on January 23rd 2009 at the Hammersmith Lyric theatre, where it will be staged until March 14th, before moving to the Novello theatre until the end of October.

Inspired by Frank Wedekind's controversial play of the same name, this Tony and Grammy Award-winning production is set in late nineteenth-century Germany and tells the story of Melchior, a brilliant young student, his troubled friend Moritz and Wendla, a beautiful teenage girl, all of whom experience a tumultuous journey into adulthood, self-discovery and sexual awakening ....

Spring Awakening's extended run at the Novello theatre will begin on March 21st, and tickets are on sale now at the cost of Â£22.00 to Â£62.00.