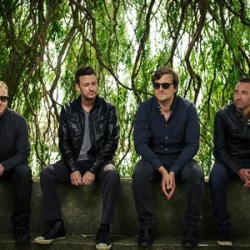 Starsailor step out on a twelve date tour next month, supported by South African indie quartet The Parlotones for all but one of the dates.

The Chorley/ Wigan-based band, named after the 1970 album 'Starsailor' by Tim Buckley will release new album 'All the Plans' early next month (9th March), preceded by first single 'Tell Me It's Not Over' (rumoured to feature the Killers' Brandon Flowers) this Monday (2nd March).