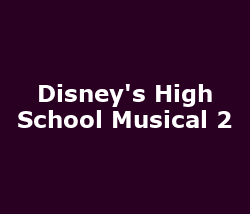 The stage adaptation of Disney's High School Musical 2 - the second instalment of the dancing and singing kids' phenomenon is set for the UK this winter.

The film 'High School Musical 2' was released in 2007, featuring the continued exploits of Troy Bolton, Gabriella Montez, Sharpay, Ryan Evans and the rest of the school kids at East High.

So far, just the Birmingham show has been announced (15th December to 2nd Jan), but more regional productions are sure to be announced soon.