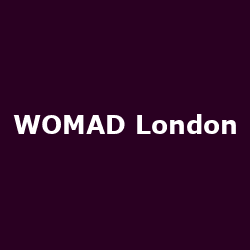 This year's Tower of London festival features something a little special - hinted at by WOMAD's director Chris Smith earlier in the month - WOMAD London!

The two day event forms part of the overall week of arts and music which comprise the week-and-a-bit Tower Festival taking place at the Tower of London between Friday 11th September and Sunday 20th September.

The Tower Festival will open on Friday 11th to the shapes and forms of Sadlers Wells dance company. The following day, Lesley Garrett, accompanied by a male voice choir will take care of proceedings, with Carl Rosa's opera company staging Gilbert and Sullivan's Yeoman of the Guard on Sunday 13th and Tuesday 15th, directed by Michael McCaffery.