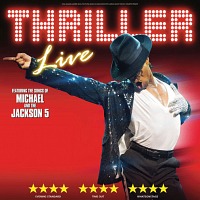 The musical, conceived by Jackson fan and author Adrian Grant, has proved to be a massive hit and was originally slated to run until the end of April. Featuring two hours of non-stop hits delivered by the cast and live band, including: I Want You Back, I'll Be There, Show You The Way To Go, Can You Feel It, Rock With You, She's Out Of My Life, Beat It, Billie Jean, Earth Song, and of course Thriller.

Tickets for the West End production cost between £23.50 and £50.50 - and a touring production is also currently doing the rounds of the UK circuit, with dates due in Newcastle, Liverpool, York, Bristol and Oxford, with new dates just added at Birmingham between 6th and 11th July going on sale on Monday 23rd February.