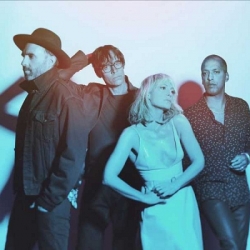 The Canadian art-rock four piece have announced their comeback!

The quartet will release their fourth opus, 'Fantasies', on April 20th. And so you place your bias right, note that 'Fantasies' was produced by Canada's national treasure producer, Gavin 'Golden' Brown, and mixed by John O'Mahony, who worked with The Strokes and Coldplay in the past.

This said, 'Fantasies' is a DIY affair as it was self-financed by Metric, via their label Metric Music International, and will be distributed independently worldwide, with the exception of Canada, Mexico and the UK, where it will be respectively distrusted by Last Gang, Arts and Crafts and PIAS/Integral. Fantasies will go on pre-sale via Metric's website (www.ilovemetric.com) as of March 2nd. And the first single, 'Help I'm Alive' will be released the following week (March 9th), on a limited run of 500 7-inch records. Until then, it is being previewed on Metric's Myspace (www.myspace.com/metricband), and an acoustic version is downloadable from their website.

The band has also announced a tour for May, dates to be confirmed watch this space!