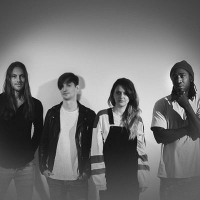 Prior to that, BP will be touring the rest of Europe and North America, only coming back home for a couple of dates in April (11th and 12th) at the London Olympia.