The Wailers to perform Bob Marley's 'Exodus' for April 2009 tour 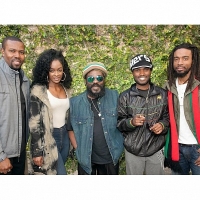 Bob Marley's backing band, The Wailers, have announced a mini tour of England in April.

The band, led by bassist Aston Francis Barrett (who has influenced the likes of Flea of the Red Hot Chilli Peppers, and Robbie Shakespeare of Sly & Robbie) and Elan Etias, have kept performing since their great leader's death in 1981, and will play Marley's classic album, 'Exodus' in its entirety.

The Wailers will play five shows: April 16th at the Shepherd's Bush Empire in London, April 19th at the Bristol Academy, April 20th at the Oxford o2 Academy, April 21st at the Leeds University Union, and April 22nd at the Birmingham O2 Academy.

Tickets cost on average Â£20, and those for the London and Oxford shows will only go on sale on Friday, 9AM.

Since Marley's demise, The Wailers have released fourth albums under their name, and collaborated with artists including Alpha Blondy. Their last notable work is a collaboration with U.S-country star Kenny Chesney on his song 'Everybody Wants to Go to Heaven', released last year.