Ida Maria goes independent - re-releases 'Fortress Round My Heart' and 'Oh My God!' 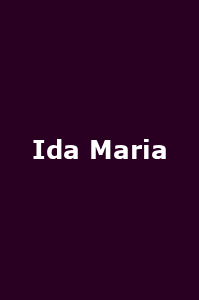 Norwegian wonderful rockeuse, Ida Maria, has just announced she will be flying with her own wings, by releasing her future records independently from now on.

Originally signed on Nesna Records/Sony BMG, she is "marking her independence" (in her own words) by re-releasing her debut album, "Fortress Round My Heart" in its entirety. The album will be available on February 9th with brand new artwork (courtesy of drummer Olle Lundin and other friends of hers), new sequencing and three additional songs.

Until then, a new edition of the now anthemic single, "Oh My God!" (originally released in 2007), will be out on Monday.

Ida and her band will be performing three shows in February as part of the NME Shockwaves Awards tour: at the London Koko on February 11th, Manchester Academy on February 12th and Glasgow Garage on February 13th.

Tickets, which cost just over a tenner (+ booking fee), are available now.