YolanDa Brown .. in the mood for love at Jazz Cafe for Valentine's Day 2009 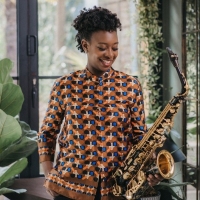 After being nominated at the Urban Music Awards and winning the Best Jazz MOBO Award last September, the gifted saxophonist will provide music for your ears on February 14th and 15th.

While she is working on her debut album, due out some time this year, this performance on Valentine's Day is only one of the many shows she will be playing in England through the next few months.

To grasp what the fuss is all about, you can catch her at various venues across London: the Indigo2 on February 21st, the Camden Centre on February 24th, the Hackney Empire on March 22nd and May 2nd, the Brixton Academy on March 29th, and at the Liverpool Royal Philharmonic Hall on March 27th. She will also play the Isle of Wight Jazz Festival on April 19th.

All tickets are on sale now.