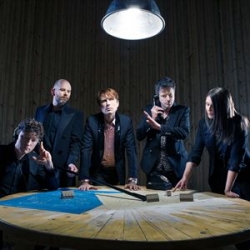 In February/March they will embark on a UK and Eire tour, launching in Limerick on February 28th, via Dublin (March 1st), their hometown Glasgow (March 4th), Manchester (March 6th), Academy (March 8th) and London (March 9th).

"Tonight: Franz Ferdinand" will follow-up from "You Could Have Done So Much Better", and that indeed seems to be the general feeling from the press, telling from the mixed reviews the album has received, with Uncut calling it "dry and superficial", and The Guardian stating "Tonight is fine, but will you still love them tomorrow?". But don't let this put you off- whereas other bands stay in their comfort zone, FF bravely experiment with their sound and their first single, "Ulysses" (out yesterday) should clear any of your doubts.

Expectedly, tonight's gig at Heaven is sold out, but tickets for the February/March tour are now on sale.